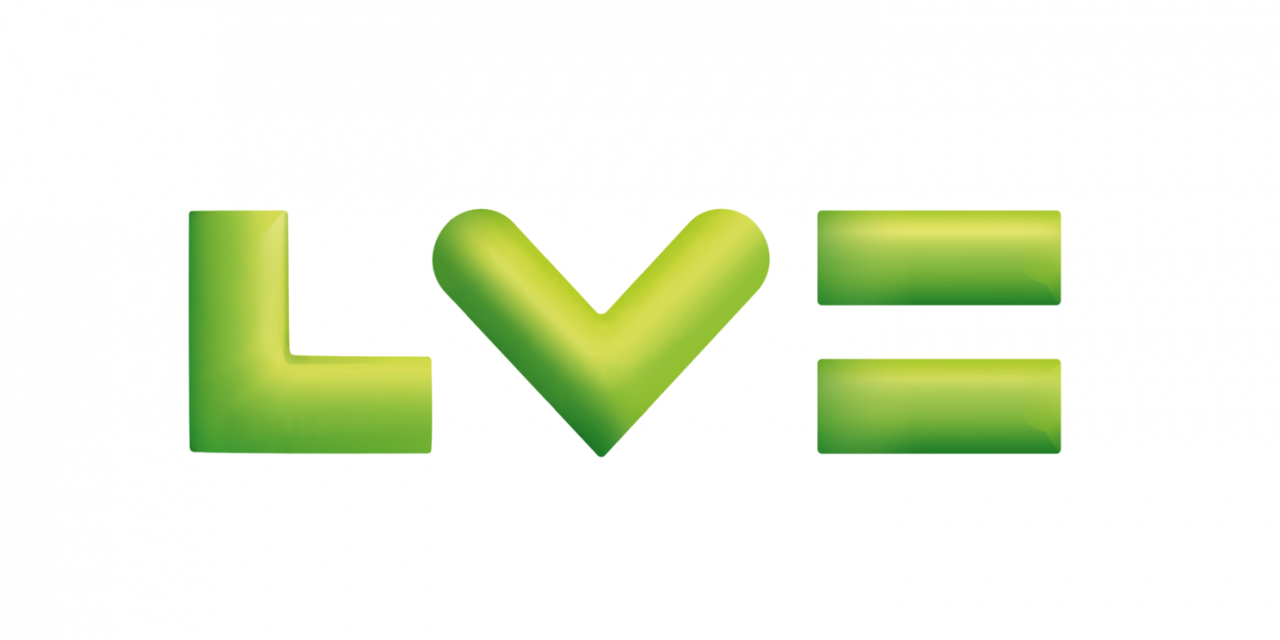 Throughout 2018 and 2019 there were a spate of changes in the critical illness market, with most insurers making a raft of alterations and additions largely to the benefit of consumers. Throughout this period, it was noticeable that a small number of insurers did not make a move, preferring to watch and wait. Today sees one of these make their move, but what are the changes being made by LV= and how does this impact their position in a highly competitive CI market?

In terms of their main cancer definition, LV= have taken the decision to consolidate Aplastic Anaemia into the wording. Whilst this will not have an impact on their likelihood of paying a claim for cancer or Aplastic Anaemia, this is a move our panel of doctors strongly disagree with and have highlighted their reasoning below:

“Due to the fact that Aplastic Anaemia causes a decrease of blood cells produced in the bone marrow it can be incorrectly thought of as a form of leukaemia. This is certainly not a cancer or tumour. Cancer is the uncontrolled growth of abnormal malignant cells. With Aplastic Anaemia, the opposite is true, with the body’s own immune system incorrectly fighting and reducing the stem cells in the bone marrow that go on to produce fully formed blood cells. This is thought of as an autoimmune process and not a malignancy.

It is our opinion that placing Aplastic Anaemia in the cancer definition is not medically accurate, adds to confusion surrounding this illness and may ultimately decrease clarity of the definition.”

In a far more positive move, LV= have added a Cost of Diagnosis of Cancer feature, which is completely unique in the market. This promises to pay £1,000 to the client on receipt of a copy of the diagnosis letter from their consultant showing the histological classification of the cancer and details of the proposed treatment. This is a really nice feature designed to help with the immediate costs of a cancer diagnosis. It is only dependent on diagnosis of cancer so not dependent on a claim being accepted and could even be paid even before the claim is fully assessed.

Other changes see LV= amalgamate their multiple system atrophy and progressive supranuclear palsy definitions into one Parkinson’s plus syndrome definition and amend their traumatic brain injury wording to also include anoxia and hypoxia under a new Brain Injury due to Trauma, Anoxia or Hypoxia definition.

Such changes along with the addition of coverage for brain abscess, heart failure, severe sepsis, spinal stroke, syringomyelia or syringobulbia mean overall coverage has been greatly improved as can be seen from the chart below:

The graphs below highlight who is most likely to pay a claim based on our independent medical panel’s assessment of insurers definitions combined with age-banded incidence data. The age-banded incidence data along with the gender, age and term of the plan enables us to weight each condition based on how likely someone is to suffer from it. Therefore, those conditions that a consumer is more likely to suffer from have a far greater impact on the overall score than conditions that are rarer.

The following example is based on a 35-year old female taking out a 25-year policy: 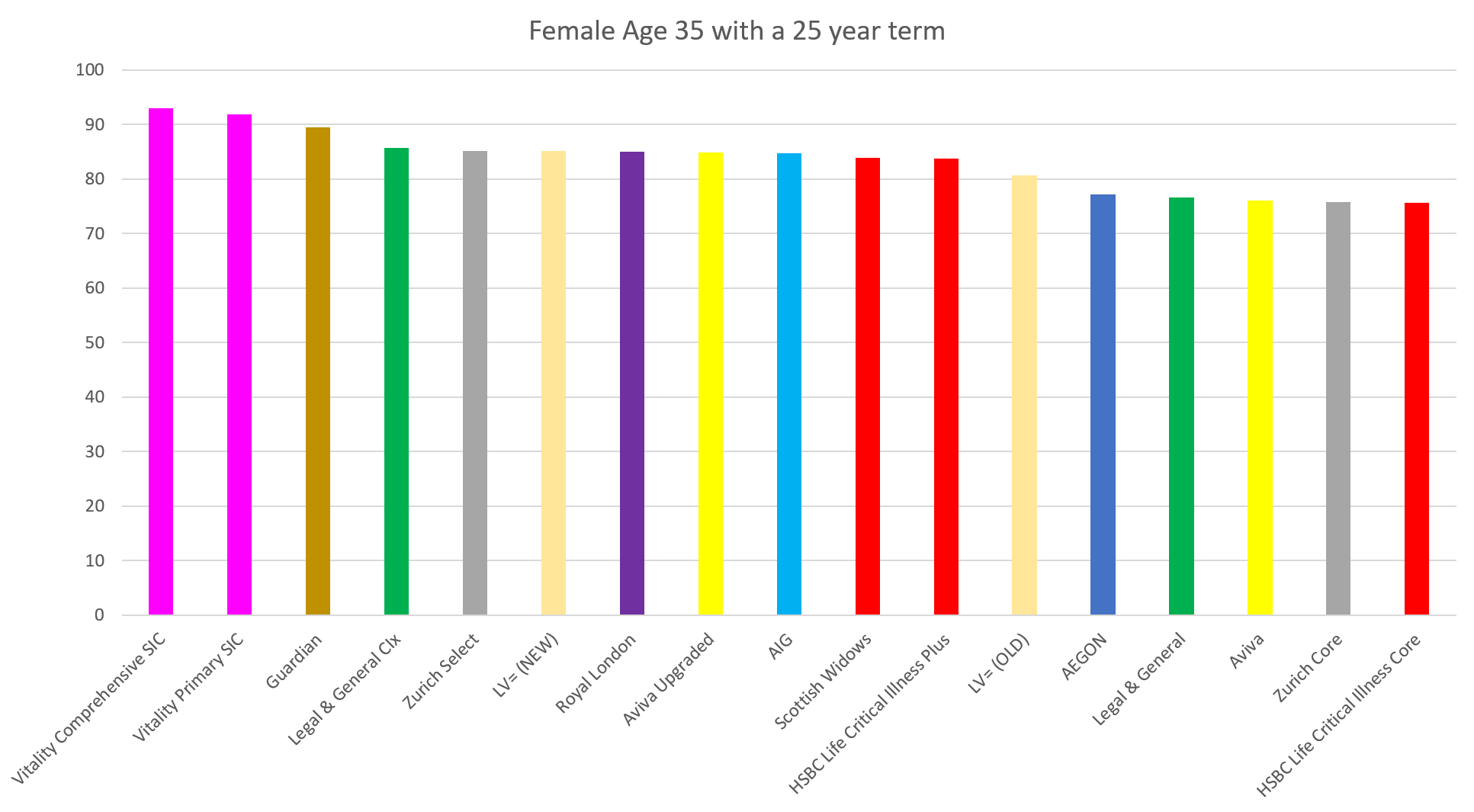 The following example is based on a 35-year old male taking out a 25-year policy: 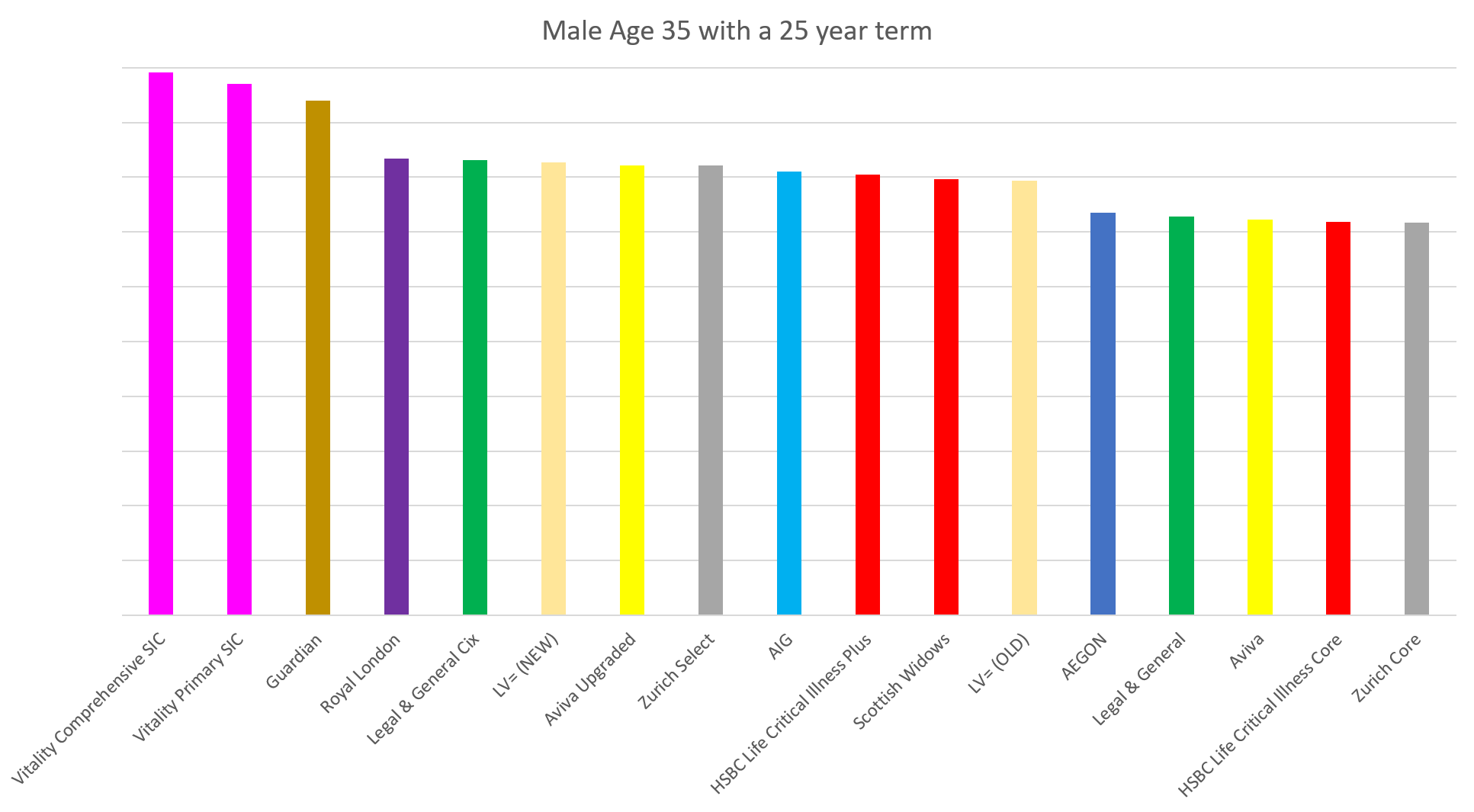 Under their previous policy, LV= would offer to pay one and a half times the sum assured if a client was diagnosed with one of six neurological conditions before the age of 45. The changes announced today, increase this to twice the sum assured up to £200,000 (on top of the sum assured) whilst also increasing the age to 55. This is a very positive move and will increase the number of people who will be able to claim for these conditions as they are generally diagnosed at an older age as can be seen below: 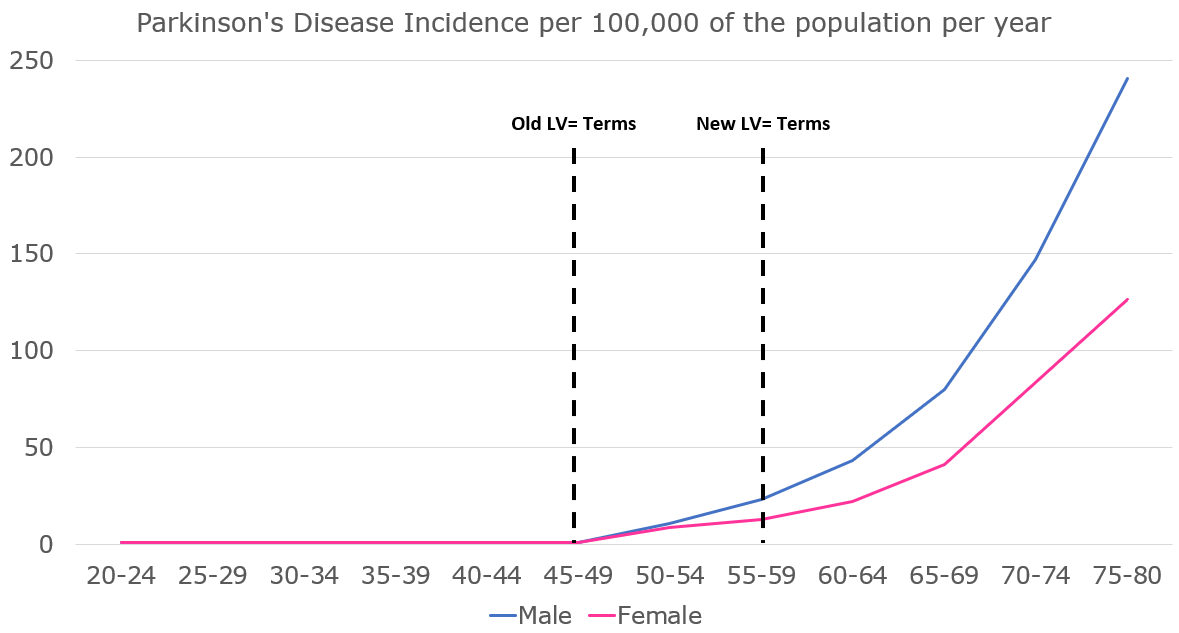 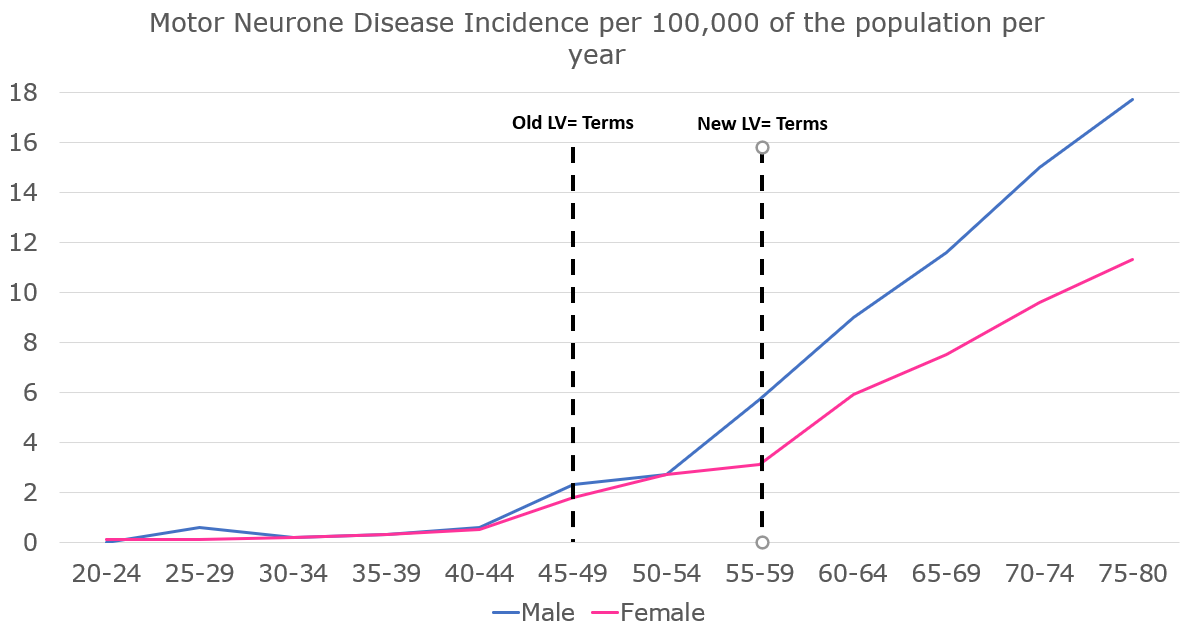 LV= have also made some positive moves in their children’s cover. All the changes made to the main policy will also be extended to children with the exception of the enhanced neurological benefit. In addition to this LV= have added a funeral benefit of £5,000 that will be payable on the death of an eligible child (see what constitutes an eligible child here) in addition to any claim that may be made for a critical illness condition.

In more positive news for the children of policy holders, LV= have increased the maximum age they will covered to from 21 to 23. Unlike some others in the market this is not dependent on the child being in full time education and means LV= join Guardian in providing the highest age coverage for children in the market. 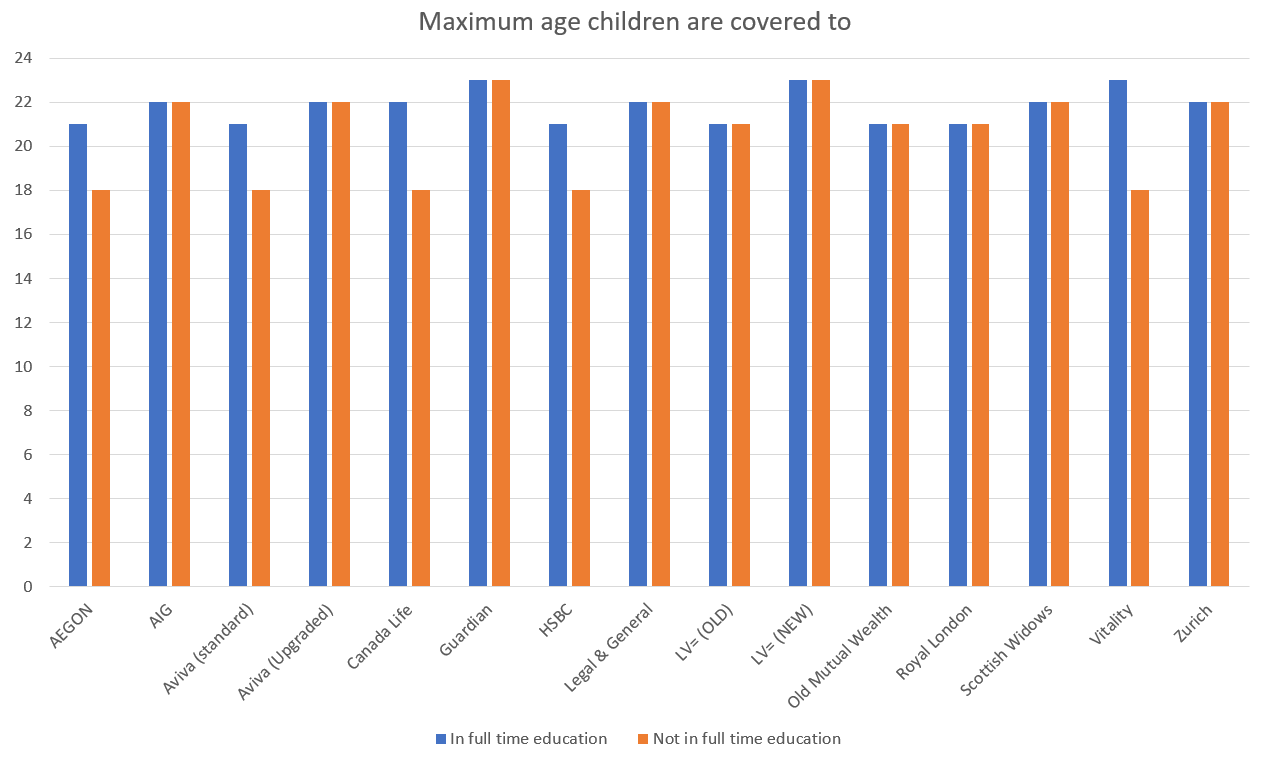 Last year we saw both Old Mutual Wealth and Zurich introduce the ability for children to take out life and critical illness cover without the need for underwriting when they are no longer covered by their parent’s policy. LV= have followed suit by introducing an option for the child to take out up to £25,000 worth of life and critical illness cover (£50,000 if both parents have individual policies) at the age of 23.

Overall these changes are very positive and bring LV= back into the critical illness market as a serious player. In recent times, the critical illness market has rightly started to make moves to increase the simplicity and clarity of wordings and it is a shame that LV= have consolidated Aplastic Anaemia into their cancer definition as this, in our doctor’s opinion, decreases clarity. We would encourage LV= to reconsider this in any future developments. This aside, the consolidation does not reduce coverage for cancer or Aplastic Anaemia and all of the other changes are very positive. LV= have perhaps become better known for the strength of their Income Protection policy in recent times, however this CI update shows that they could equally be a force in the critical illness market going forwards. 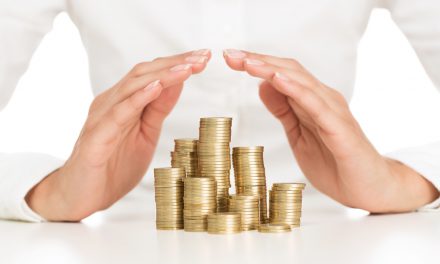 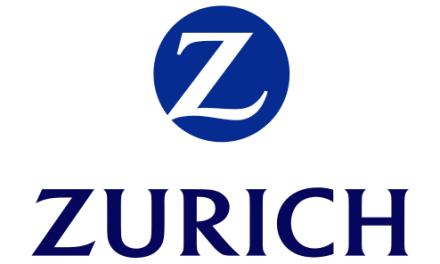 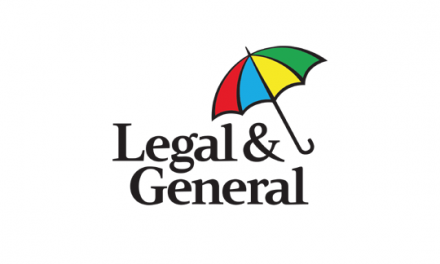